Everyone knows La Catrina, beautiful female figure, white, thin to the bone, elegant and mysterious, which at this time of year we usually represent as the main symbol of the Day of the Dead festivities; but its origin had another intention, same that we will tell you … Between the governments of Benito Juárez and Porfirio Díaz, Mexican society suffered from injustice and inequality – where have we heard that? there were 3 social classes, the Upper Class that was made up of politicians, landowners, large merchants and industrialists, traveled to Europe, lived in large houses with services and at their parties dressed in elegant dresses of light colors and large hats; the Middle Class was a small group since the upper class refused to share its wealth with them, and was made up of small merchants and bureaucrats, teachers, professionals and journalists; and the Lower Class, which was the majority of the population and was made up of peasants, miners, factory workers and domestic workers The newspapers of the time began to criticize the social situation of the country, one of the main critics being the Mexican cartoonist José Guadalupe Posadas, originally from the City of Aguascalientes, who began to use the figure of a skull as a symbol of his criticism; little by little it took the name of Calavera Garbancera because it represented the mockery that was made of the chickpea sellers who, being poor, pretended to be rich and pretended to have a lifestyle like the Europeans and despised their traditions and indigenous roots; She came to be represented dressed as a charro, in a suit, on a horse, dancing and drinking, eating or simply talking; at that time being told that you were a Calavera Garbancera was an insult 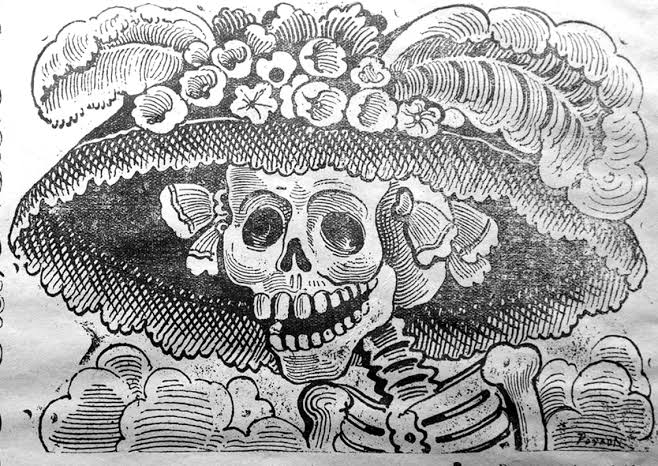 Along with the image of the Skull began to emerge small thoughts and verses that also criticized the social situation, thus emerging the Literary Skulls, in fact José Guadalupe Posadas came to write "in the bones, but with his French hat of ostrich feathers " But the name of Catrina received it until 1947, when the muralist Diego Rivera baptized it that way referring to the elegance and good dress with which the privileged class of the country was identified at the time of the birth of the Skull, and he captured it in his mural called "Dream of a Sunday afternoon in the Alameda Central" Something that is still valid and will continue is what José Guadalupe Posadas came to affirm "Death is democratic, because at the end of the day, güera, morena, rich or poor, all the people end up being Calavera"